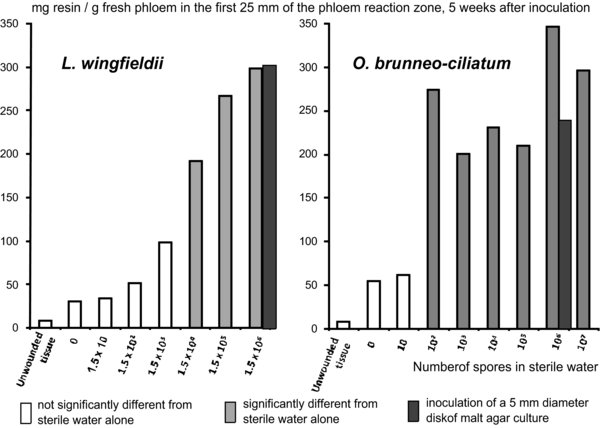 Resin concentration in the phloem hypersensitive reaction zone of Scots pine, 5 weeks after low density inoculations (16 to 18 inoculations per tree in total) with sterile water containing various numbers of fungal spores of L. wingfieldii and O. brunneo-ciliatum, and comparison with inoculations with 5 mm diameter disks of 3-week-old malt agar cultures (adapted from Lieutier et al., 1989a). Statistical tests were performed by comparing each resin concentration value to that obtained after inoculation with sterile water alone, and their results are indicated by the histogram color. For a tree response to be significantly different from that induced by sterile water, at least 104 spores were needed in the case of L. wingfeldii, and 102 in the case of O. brunneo-ciliatum.